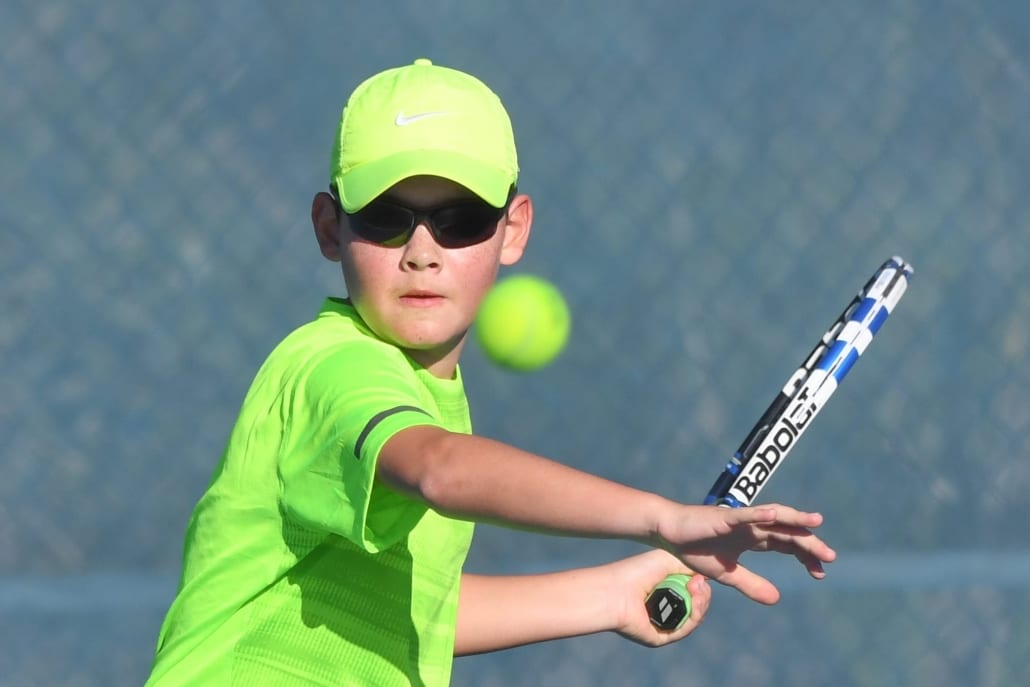 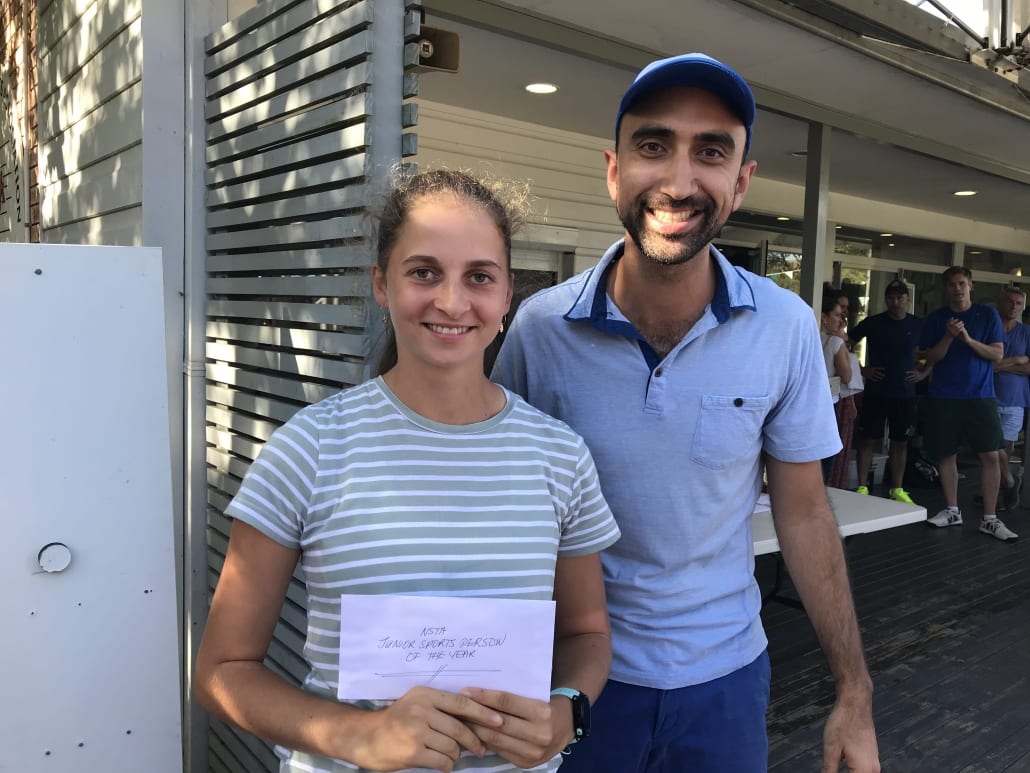 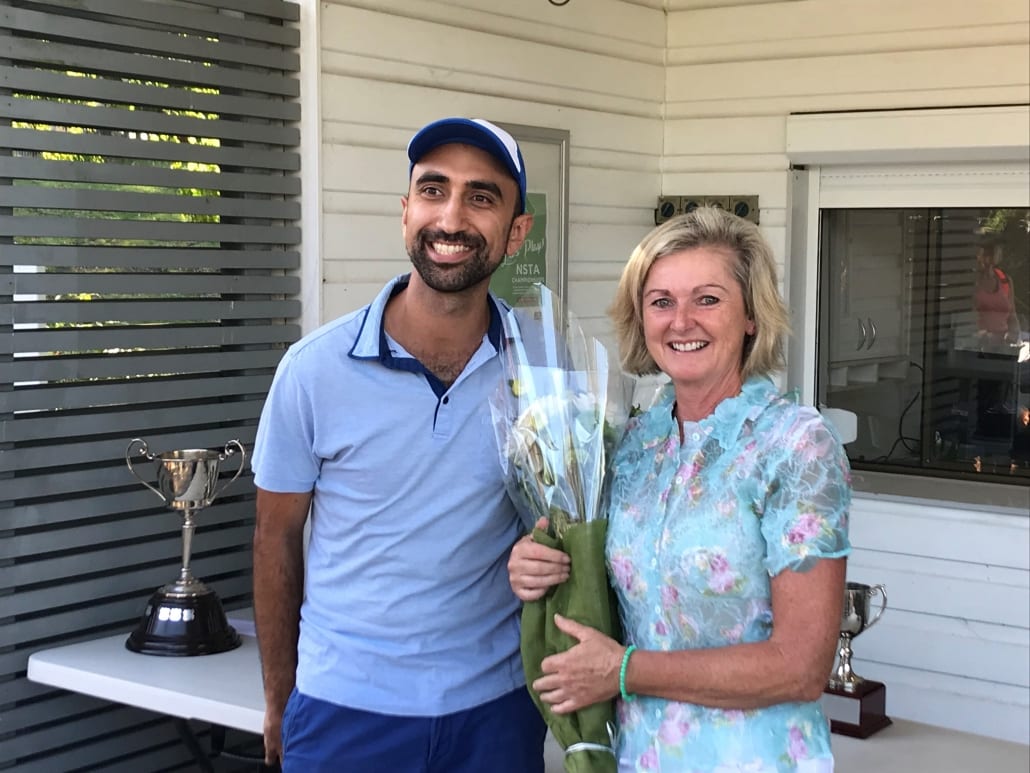 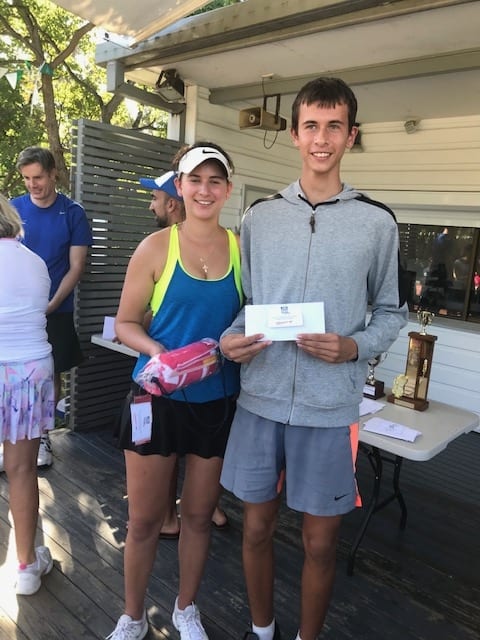 Our junior players excelled at the recent 2019 NSTA Championships both on and off the court.  Six of our juniors competed in finals.  And two of them were awarded sports awards.

Well done to brother and sister act – Misha and Alisa Jeregui – for being finalists in the NSTA Open Mixed event. Check out all other Lane Cove finalists.

Possibly 2020 will be the year for the juniors and the golden oldies to shine!!

Jenna Svatos was awarded NSTA Junior Sportsperson of the Year.

“Jenna has competed in NSTA competitions and tournaments for over 5 years.  During that time her attitude and behaviour both on and off the court has always been exemplary.  From the Lane Cove Club, she was awarded a Jack Fraser Scholarship where she continues to support her Club as well as the NSTA.  A most deserving winner of the Junior Sportsperson of the Year.”

Junior of the Year

What a start to the year Tom Garrett is having.  On top of his recent titles at the NSTA Champs, he was also awarded Junior of the Year.  Congratulations Tom.

About Keith Hawton
Keith was President of Chatswood Tennis Club from 1963 – 1973, and President of NSTA from 1969 – 1982.  He was a driving force behind the Talus Street development and was one of the Directors of the Northern Suburbs Tennis Club Limited which was formed to raise capital to fund the construction of the complex.  We tennis players of the NSTA owe Keith a huge debt.  He had foresight and to him, nothing was impossible.  He took on challenges on and off the court, all for the betterment of the NSTA and tennis.

It is in Keith’s honour NSTA instigated a new award, to be known as the Keith Hawton Award for Volunteer/Administrator of the Year.

“We are pleased to present the inaugural Keith Hawton Award for Volunteer/ Administrator of the Year to Sue Woodward.  Sue joined the NSTA Committee in 2010 as a Committee member and soon stepped up to be a Vice President, a role she has since held.  She is also the Secretary of the Lane Cove Tennis Club and has been a Board Member of Tennis NSW.

Sue has huge energy and enthusiasm for any task she undertakes, and to her nothing is impossible.  She continually steps up to volunteer for anything that needs doing … School Challenges, Family Challenges, round robins, competition finals, barbecues.  She has no limits and never says ‘no’.  She can always be relied on and always gets the job done.  Sue thinks outside the square, is transparent in anything she does and is a perfectionist when it comes to due diligence.   Sue personifies Keith Hawton’s principles of volunteering.”